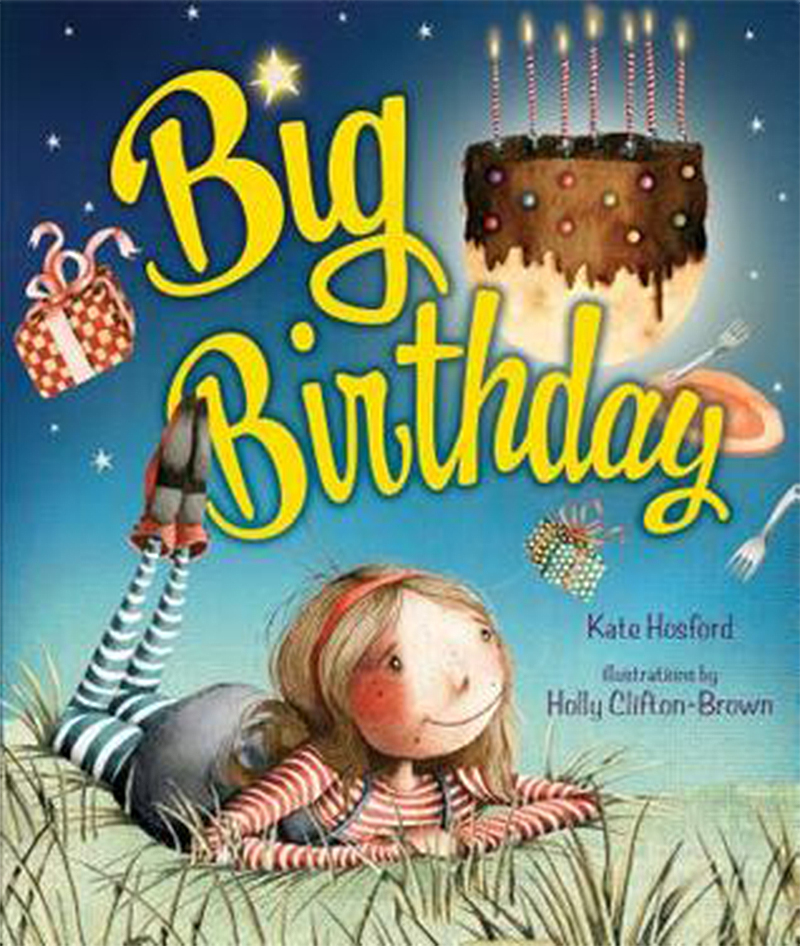 Annabelle was tired
of birthdays at the zoo.
She yawned at the monkeys
and the baby kangaroo.

My birthday is soon.
It’s practically here.
I think I’ll have a party
on the moon this year.

Annabelle is determined to have a birthday that stands out from the rest. But wearing spacesuits and partying in a place with no atmosphere create some challenges that Annabelle didn’t expect. Will her out-of-this-world birthday party still be a blast?

Holly Clifton-Brown has illustrated many imaginative children’s books, including Big Bouffant (Carolrhoda Books). She is also the author and illustrator of Annie Hoot and the Knitting Extravaganza (Andersen Press USA). Holly lives in London. You can visit her website at www.hollycliftonbrown.co.uk.

I was very lucky to be paired with Holly Clifton Brown for these books. I especially love the depth of her illustrations. I think she achieves this richness by doing a lot of her work by hand before scanning it into the computer and manipulating it. She also uses many interesting textures like fabric and paper bags, but she integrates them seamlessly so that they do not distract the reader.

Her sense of whimsy was just right for Big Bouffant and Big Birthday, and her palettes and patterns speak for themselves. If you are interested in learning more about how Holly works, check out her blog: hollycliftonbrown.blogspot.com.

School Library Journal:
“Annabelle is back, and she is tired of having her birthday at the zoo. This year she wants something completely different, so she begs to have a party on the Moon. After some initial hesitation, her parents hire an astronaut and rent a rocket ship, and the partygoers are on their way. But things do not go quite as Annabelle imagined. Her friends get bored on the long trip as their games are too hard to play in zero gravity. Once on the Moon, the hungry guests can’t eat the cake because of their helmets, and it gets covered in moondust. After opening her presents, Annabelle tries on her favorite gift, a dress, but it rips going over her spacesuit. “‘My birthday,’ she cried, ‘has become a big mess. I’m not having fun and neither are my guests!’” As they head home, Annabelle envisions next year’s party–a trip to the backyard in a homemade purple pirate ship. Clifton-Brown’s use of color, texture, shadow, and spot-on facial expressions with a bit of mixed-media collage thrown in is a delightful partner to the text. Varying fonts and text placement within the illustrations add a nice touch to the story. Hosford’s rhyming text is fun to read, and kids will enjoy hearing about a great idea gone wrong.” (K-Gr 2)

The Making of Big Birthday

After writing Big Bouffant, I wanted to make sure that Annabelle attempted something even more outrageous in the sequel. I decided to center the story on her birthday party, which seemed likely to provide a good setting for this sort of thing. Annabelle wants a birthday on the moon, partly because no one has ever had a birthday there before. However, one of the lessons of thinking big is that sometimes what we think we want, is not really what we want at all. A birthday on the moon sounds perfect, until Annabelle has to contend with a long trip, candles that won’t light, guests who can’t eat because they are wearing space helmets, and moon dust that covers everything.

I have more than a little Annabelle in me. When I got married, I thought it would be fabulous to do something called the butterfly celebration where the butterflies hatch on the day of the wedding, and then are released into the sky as the bride and groom leave the church. Luckily, my mother convinced me that Vermont was too cold for this sort of thing and it would probably result in a butterfly mass suicide. She also had to talk me out making my husband a wedding quilt two weeks before the wedding. This was a wise choice since I didn’t know how to sew. In the end, the wedding was fabulous without any butterflies or quilts.

Annabelle’s parents are willing to go along with her moon birthday, but cannot stop it from failing. Luckily Annabelle is able to dream up a backyard pirate party the following year. While this is a much simpler party, Annabelle provides her guests with the opportunity to imagine wild pirate scenarios. Perhaps she has learned that the greatest trip we can take is the one that happens in our own imaginations.

Hopefully, what kids will admire most about Annabelle in this book is her resilience. Anyone who is a visionary thinker has to be prepared for occasional failure. However, the test is not whether the vision succeeds or not, but whether we can learn something from our failure and create a new vision. This is what the creative process is all about: trying, failing, trying again, and eventually coming to understand how we are unique.